School will be closed to ALL pupils on Tuesday 5th January

We are very proud to belong to the Devon Primary SCITT as a strategic partner.

This is a group of schools that are focussed on producing outstanding teachers and leaders, whether as a trainee, NQT or experienced practitioner.

Find out more at www.dpscitt.org.uk

We work closely with a group of Church Schools to raise standards in children’s learning. These schools include our federation partner Tipton St John; St Martin’s, Cranbrook and Withycombe Raleigh Primary in Exmouth. The document below explains our shared vision and what we have achieved together so far. 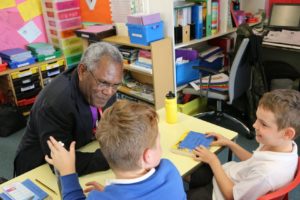 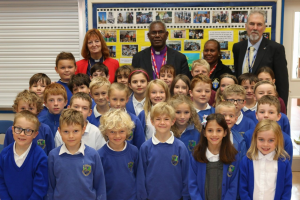 On Wednesday 20th September 2017 we were joined by Archbishop George Takeli and his wife.

In our Act of Worship Year 4 talked to the school about caring for God’s creation and ways in which we can all make a difference and earlier in the week every class watched a video which showed the negative impact of climate change on the Solomon Islands. The Archbishop enjoyed talking to the children and answering some of their questions

In June 2015 four teachers from the Solomon Islands visited the UK and spent 3 weeks at Feniton and Tipton St John Primary Schools. This visit funded by the Melanesian Mission UK, further strengthened links between our schools. The Solomons teachers worked alongside our teachers learning about daily organisation, behavioural management, the effective teaching of English and promoting pupil talk. The pupils at our schools were able to explain their different ways of learning  and also learn more about the culture of the Solomon Islands and the teachers’ experiences visiting a new country for the first time. It was hugely valuable for us all. 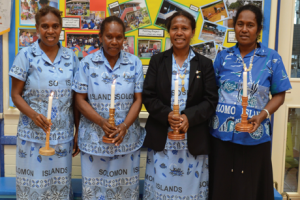 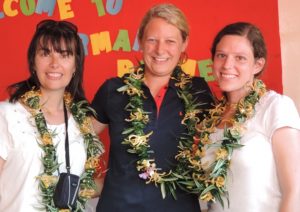 In 2011 and 2013, Colin Butler, Executive Head visited and in 2013 signed a partnership agreement between the schools. 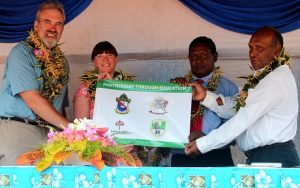 It was an honour and privilege to welcome and host the Archbishop of Melanesia and his wife on 18th May 2010. Archbishop David spoke about his life in Melanesia, and the important links with John Patteson and this local area. Hearing the Lords Prayer in pidgin, said by the Archbishop was a particularly moving moment. Future plans are to develop links with a Melanesian school and the Archbishop returned home with a folder of information in which every child from Feniton Primary has contributed, by way of introduction.

“I learnt that in some aspects Melanesians are quite similar.”
“I learnt in some ways Melanesians were very different to us.”
“It felt a really special time.”
“I like the way Melanesians made their footballs to play with.”

The Melanesian Mission UK is an Anglican mission agency that provides support to the Anglican Church of Melanesia (ACoM), through Prayer, People and Giving.

The Community of the Cross of Nails – growing together in hope.

We are an ICON School.

We are a worldwide network of over 200 churches, charities, peace-building centres, and educational and training organisations, inspired by the Coventry story of destruction, rebuilding and renewal, and active in reconciliation in our own ways.

All members adhere to the three guiding principles of the Community of the Cross of Nails: Healing the wounds of history, Learning to live with difference and celebrate diversity, and Building a culture of peace. We are guided by the words ‘Father Forgive’, and we pray a Litany of Reconciliation on a regular basis.

Today, our greatest numbers of members are in Germany, the UK and the USA, but we also have sizeable numbers in South Africa, the Netherlands and Central and Eastern Europe; overall, we have members in 45 countries across all continents.

At Feniton we focus on our links with Melanesia, a relationship which historically was marred by conflict and mistrust, which now is trusting and makes a positive difference to our communities. We support one another, pray for one another and share with one another. 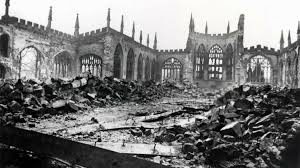