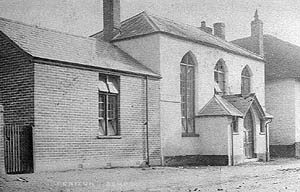 In 1844 a one room Voluntary School was promoted by Miss Patteson at the side of the road leading to Curscombe and near the Court Barton farm buildings. It could accommodate 64 children although the average attendance was about 41. In 1846 records show there were 18 boys and 26 girls, the lack of boys may have been due to the fact that they were working even at that early age. The school was designed with the school room on the ground floor and accommodation for the teacher was on the upper floor with access via an outside stairs.
The school cost £35 per year to run. The teachers pay was £21 per year, and the Under Teacher received £4-13-0d per year. It was financially supported by Miss Patteson and Mrs. Hart, the wife of the then rector, together with other subscribers.

It was decreed that it should be a Church school as it has to this day, but was referred to as a National School.

In 1863 the Parish schoolhouse was gifted by Mr James Henry Patteson and his sisters to the  village by a Deed; the Rector and the Churchwardens acting as Trustees for the village and to “secure its permanent character as a Church School”, In 1864 Feniton school was transferred to the Church for the sum of 10/-.

Subsequently the Local Government Board paid to the school an unknown sum of money out of funds held by the “Guardians of the Honiton Union for the parish of Feniton”, for the enlargement of the school and improvement of the buildings so in 1873 the school was enlarged with an extra classroom to meet the needs of the Education Committee.
The Headteacher salary was now £26 p.a. and the under teacher £5-0-0d p.a.

In 1902 the school came under the 1902 Act, thus becoming a LEA Voluntary Church School from a National School. In 1905 an extra area of land which had been an orchard was purchased from the Rasleigh’s of Feniton Court for £81-5-0d, this was added to the school as a playground.

The school was again enlarged in 1910 by the addition of a room for infants at the east side and at this last addition the upper residential floor was done away with. This year also saw a further piece of land from the orchard adjacent to the school purchased from Col. Acland to enlarge the playground.

During 1944 Elm Cottage and the general store, which were next door to the school, were burnt down, as a result this allowed a dining room to be established which later became a canteen. This provided cooked meals for the school children.

In 1947 the school now became a Junior School, the seniors were transferred to other schools in the area. It was in this year that the water for the school, which came from a well, was causing problems. It was not surprising as the pumps were in the teacher’s lavatory!

1948 saw Buckerell children enrolled into the school and Gittisham children were transferred in 1949.

Electricity, which we now take for granted, was only installed in 1952 and mains water in 1957 these replaced oil lamps and well water.

The need for a new school was recognised in 1961 and by 1962 negotiations for the site had progressed well. The LEA was to purchase the land on which the present school is located and it was convey it to the trustees but the play ground remained in the ownership of the LEA. The LEA agreed to erect the buildings and the Government gave a 75% grant. Money also was provided by the Exeter Dioceses and  there was £500 in the School rebuilding fund. Other money was made available from the sale of the old school. The school was designated a New 2 Class School which would allow an increase in the population of Feniton with the building of new Council Houses and the new estate.
By 1964 the purchase of the new school site had been completed. The new school had been planned for the 1964/5 building programme and so Feniton became high on the priority list. The Managers, now the Governors, wrote to the LEA pointing out the poor state of the present school because there was a “Big Freeze” in March of 1964 and this resulted in damage to the building. The water supply was frozen and damaged, the canteen could not function and Half Term was cancelled presumably due to a period of closure.

Not until October 1965 was the final approval given to build the new 3 classroom school at an approximate cost of £22,000 and it was promised that work would start early in the New Year however it did not start until the 1st October 1966 when Lord Roborough, Lord Lieutenant of Devon laid the foundation stone. The tender was agreed at £2460-£2650 and completion was due in August 1967.

Eventually the new school was in use by September 1967 and scheduled to be officially opened on the 26th October by the Bishop of Exeter. At this special event the village Rector, Rev. Bussell lead a short service. The final cost of the school was £27,346.
In 1970 notice was received that Talaton school may be closing. This was confirmed and that the children would transfer to Feniton once an extension was completed. Work on this new classroom was scheduled to start in April 1971and be complete before the beginning of the Autumn term; it turned out that it would not be completed on time as so Talaton children did not join the school in September 1972.

Not only was there the village school but in the early days there was also a Dames school for boarders in the village. This was run by two sisters Jane and Mary Ann Murray at Thorne in the old village. Little is known about this school but should anyone have information we would be pleased to include it in our history.